We love trains, I especially love being around them.

My folks first introduced me to trains in the little town of Guadalupe, Calif. while we lived in Santa Maria in the early 1950’s.

Since then whenever I am near railroad tracks or hear the distant rumble of a train my pulse quickens.

In the last 40 years, Denise and I have ridden trains all over the world and the USA including Thailand, Burma, China, Sri Lanka, India, England, Chile, Australia, New Zealand, Canada and several other exotic locations.

One of our all time favorite train rides was from Beijing to Ulan Bator skirting the Gobi Desert.  A massive steam engine pulled us through the night passing the Great Wall of China at sunset.

As we steamed across the Mongolian-Manchurian Steppe’s, I spent many hours leaning out the coach door in freezing temps watching the Mongolian grass lands pass while listening to the howl of the steam whistle.

It was one of those magical experiences one never forgets.

Most often instead of flying or taking a bus to our next destination we would take an overnight train if we could.  This allowed us enough time to see the countryside and enjoy the full sleeper-car experience (they were very hard berths in China). It also gave us time to meet the locals and make new friends.

In the early 70’s while hitchhiking our way to Alaska, my brother and I and our friends hopped a Canadian freight between Prince George and Prince Rupert.

There is nothing quite like riding in the open doorway of a boxcar at 70 mph while passing through hundreds of miles of stunning scenery.

It is especially exciting when you pass over a trestle with a 300′ drop to a river below.  An absolutely exhilarating ride!

The trip lasted over 13 hours until a railroad brakeman kicked us off near the coast.

Obviously todays trains are not the fastest way to travel but if you have the time they certainly can be relaxing and reminiscent of a time when life was slower paced.

Almost all of the current rail beds in this country were constructed before the turn of the century and as you ride along today you can visualize what the early west used to look like.

Imagine looking out the coach window and seeing hundreds of thousands of buffalo across the plains or crossing the Colorado River before it was dammed.

Whenever we get a chance to camp near train tracks it is very exciting.  Yes, it can be noisy but to some of us it is music to our ears.

I find the rumbling sound of steel wheels and full throttle diesels comforting, it makes me yearn to be on board headed for some distant exotic location.  I guess I should have worked on the railroad.

Recently we returned to the same area but decided to camp closer to the Southern Pacific main line which parallels Sidewinder Road for a few miles.  This enabled us to easily watch the trains as they passed by.

We set up camp about a 1/4 mile from the tracks and let me tell you it is a very busy line.

There was a siding along the area and often trains waited for other trains to pass which which gave me plenty of time to photograph.

A train would pass about every 20-30 mins or less.  At first the big dogs were very excited by every approaching train but that quickly faded.

99% of all trains passing us were freight trains hauling shipping containers.  One has to wonder what the heck was is in all the thousands of containers that passed us during our stay.

There is currently only one Amtrak passenger train daily each direction called the Sunset Limited.  It  would passed our camp in the middle of the  night around 3:00-5:00 am…we never saw them.

Not as much need for passenger trains these days, people just don’t have time to ride trains anymore. 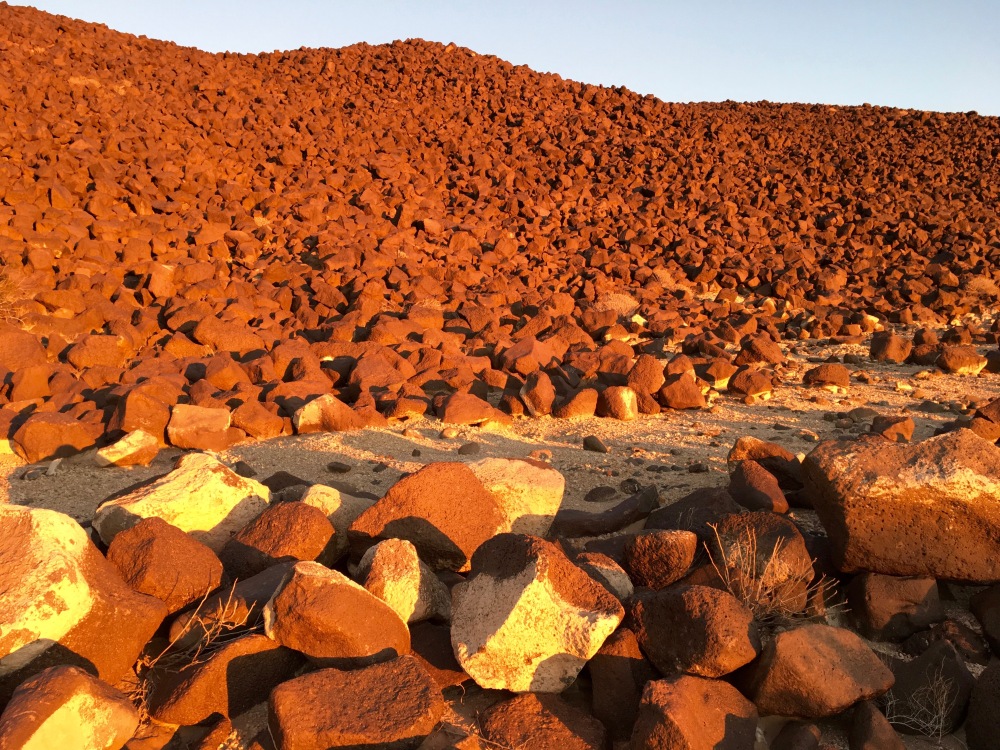 A short distance north of the railroad is a group of low brown hills isolated from the adjacent Cargo Muchachos mountains.  They are composed of a dark volcanic basalt stone that in the past was used for ballast and riprap along the railroad.

The boulders were all about the size of a wheelbarrow and were extremely hard.

Our campsite was situated at the base of  these rocks and made for a very interesting backdrop.  One morning just after sunrise we watched a lone coyote disappear into the boulders to his den just up the hill from us.  The big dogs heard them at dusk each night and did a little of their own howling.

What was strange was that the boulders only covered the surface of the ground a few boulders deep.  Beneath them was a a huge mound of white soil.  Not sure what kind of  geologic formation this would be called.

Our daily walks took us over and around these strange formations.  From the top of the boulder piles we could see dozens of motorhomes camped about 2 miles away along Olgiby Road.

We were glad to be only ones camped along the Sidewinder access road.

For 5 days we thoroughly enjoyed ourselves trainspotting along Sidewinder Road before heading back into LA for the holidays.

In the evenings clouds would form in the distance making for some fantastic sunsets over the Imperial Sand Dunes.  The night sky stars were incredible, what more could one ask for.

Pop in the ear-buds and enjoy!  Be sure to watch in 1080p for the best picture quality.

Be sure to subscribe by clicking the pop-up button below if you haven’t already!

Next we head below sea level for more adventures…..keep you posted!

21 thoughts on “Trainspotting Along Sidewinder Road”