My neck was sore from staring out the driver’s side window.  Struggling to keep my eyes focused on the road ahead I gazed longingly to the left at what I consider to be my home range of mountains, the High Sierra.

Even though we live in Alaska, the land of big mountains, the Sierra Nevada is what John Muir called a “gentle wilderness”. To us this means direct access into a wilderness of solid granite, bubbling creeks, the smell of pine and no large carnivore

It often feels like coming home when we drive Hwy 395 south of Tahoe.

The Owens Valley is situated about 9000 ft. below the crest of the Sierra Nevada.

The valley is bisected by this single north south road that closely parallels the edge of the great range.

Hwy 395 is a 1,305 mile ribbon of asphalt running through some of the most scenic and far-flung reaches in the western United States.  Starting in Laurier, Washington at the Canadian border and ending near Lancaster, California.

It is one of the most spectacular and scenic drives one can take in the west.

In the late 60’s and into the mid 70’s this road was my primary access to a world of superb rock and mountain climbing that exists along the eastern flanks of this great range.

You might say entering the Owens Valley and accessing the high country from the eastern side is a form of instant gratification. Within a few hours of any trail head one can easily be at a high elevation and deep into the backcountry.

Often the eastern side provides a surreal and awe-inspiring luminescent light called alpenglow that baths the range in a radiant orange glow.

Highway 395 is our preferred route when traveling from Alaska to Southern California. This spring we again enter the Owens Valley on our northbound journey.

The record setting winter finally looks to be over but most of the upper elevation roads and  campgrounds remained closed due to unplowed deep snow.

Last season we were able to camp anywhere.

At some of the higher elevations the snow pack is over 90 ft. deep.

Thousands of feet below, residents of the Owens Valley are preparing for the impending inundation of water. In early April we already see water everywhere with heavy equipment cleaning ditches and re-building berms.

The good news may be that after decades of drought Mono Lake and Owens Lake may actually be re-filled.

Los Angeles should have plenty of water for its lawns, golf courses and swimming pools, the drought is over.

We enjoy exploring new locations and this quest leads us into the Volcanic Tablelands just north of Bishop.

We had visited here in 2015 (see here) but had never camped within the tablelands. The area is administered by the BLM and camping is free with maximum stays up to 14 days.

On a whim our good friends the Blanic’s decided to drive over from the coast to join us. With detailed instructions they arrive at our new found camp within just a few hours.

Reconnoitering the area roads in the bug we were able to find a fantastic campsite perched on the edge of the plateau overlooking the Owens Valley and the snow covered crest beyond….wow!

Sometimes life becomes harmonized in a way that makes one consider how lucky we really are!

There’s nothing quite like spending 5 days camped in a spectacular location with extraordinary friends. 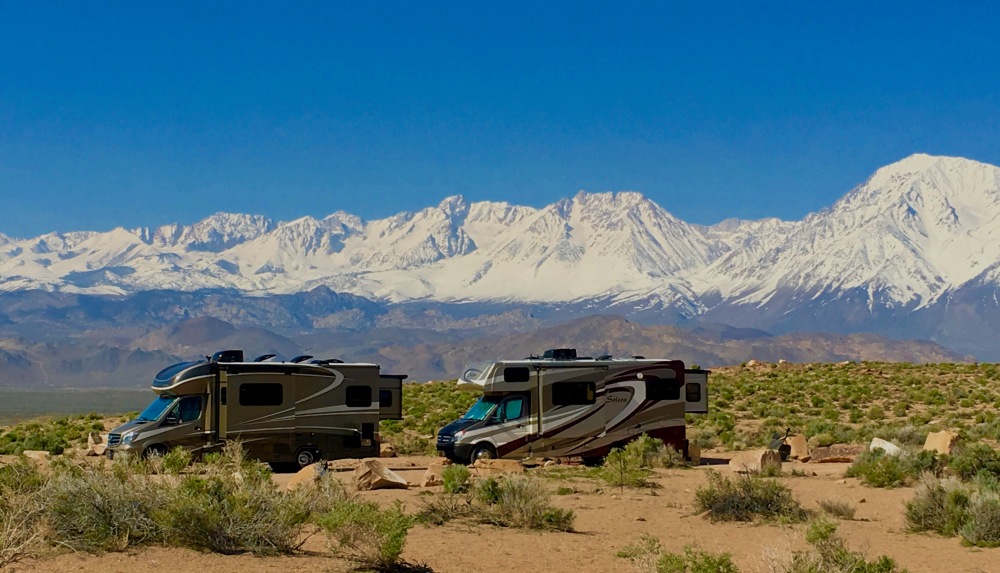 We explore the upper tablelands finding ancient petroglyphs, photographing spring wildflowers and gaze upon the spectacular views of the range.

The Blanic’s brought along a new family member, a cute little dog named Kiah. She and Sydney, Tuks and LuLu enjoyed many fun adventures while running across this highland desert.

Our evenings consisted of relaxing around the fire, toasting the moon rise over the White Mountains as Michael grilled exceptionally flavored meats with the orange glow of the sun setting in the west.

It just couldn’t get any better. 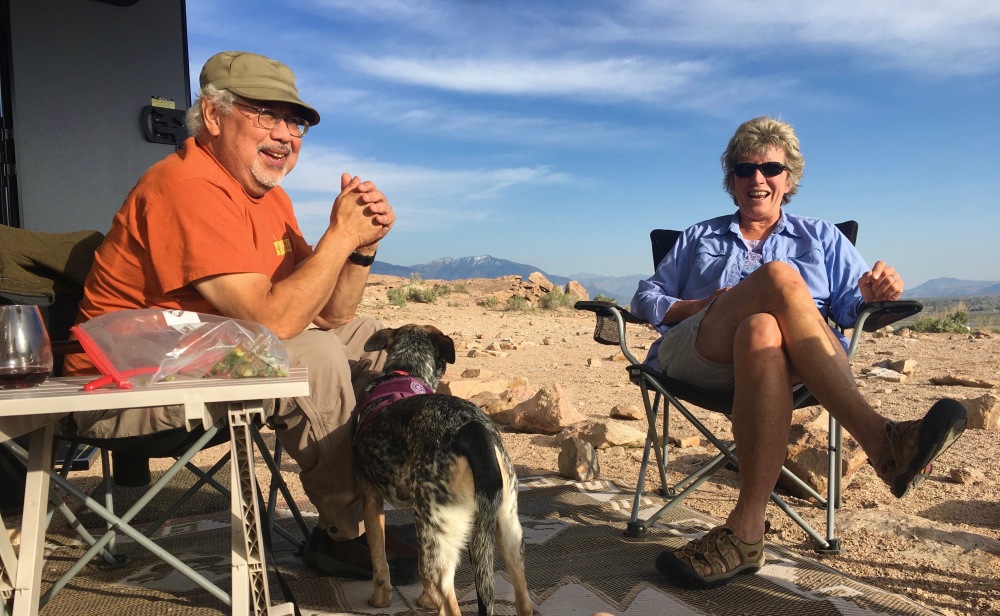 All too soon it was time to head north and we had to go our separate ways. The time we spent at this unforgettable location with our remarkable friends will never be forgotten. Thanks for the good times!

Don’t miss our newest video “East of the Crest”.  Slip on the headphones, turn up the stereo and enjoy!

Next we head home to Alaska…stay tuned!

12 thoughts on “East Of The Crest”