Skip to content
Posted on February 1, 2016February 2, 2016 by gonewiththedogs

Every once in while you come across a place that affords a glimpse of what life on earth might have looked and felt like during prehistoric times.

Recently we spent time just outside the town of Niland, California along the shores of the Salton Sea.  In this post I visit the spectacularly active Morton Bay mud volcanoes. 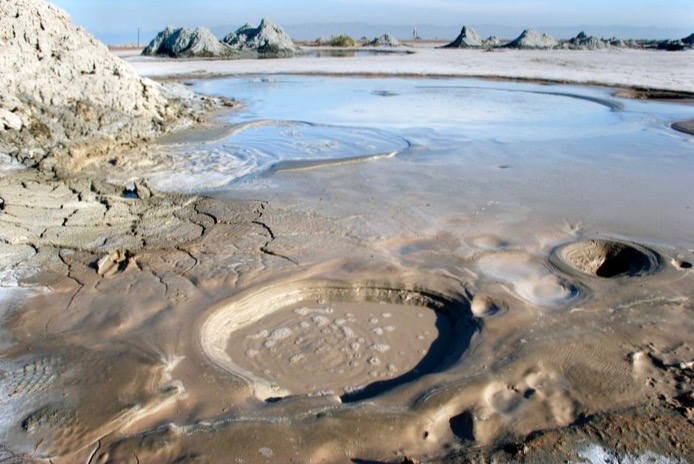 The receding shoreline of the Salton Sea has exposed some very interesting and long submerged geothermal features.

In our recent post I learned the reasons why the lake is shrinking (remember here)  In this post I learn about the geothermal activities and energy potentials of this area.

Mud volcanoes, mud pots, mud domes, paint pots and several other names are given to these features.  The more scientific term is fumaroles and the raised mounds are called “mud volcanoes”.

These kinds of volcanoes have been identified all around the world including United States, Canada, Taiwan, Italy, Iran, India, Pakistan, Romania, Burma, China, Indonesia, Japan, Colombia, New Zealand and Venezuela just to name a few countries. Most, however, appear in Eastern Azerbaijan.

Scientists think there may even be a few mud volcanoes on Mars. 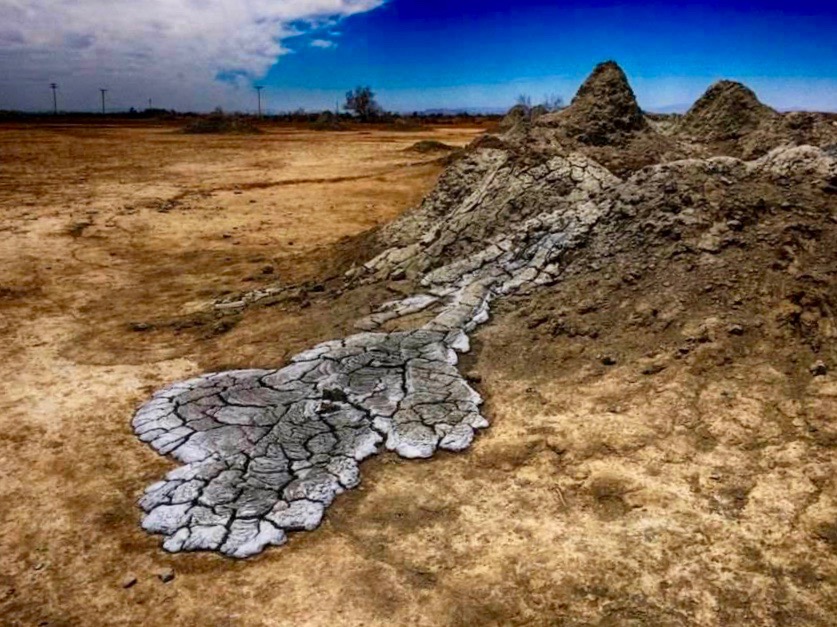 The fumaroles are fueled mostly by CO2 gas, Carbon Dioxide, the same CO2 that goes into a soda pop.

Other gases that are released are methane and also much smaller quantities of nitrogen, so breathing straight out of one of the tubes would probably be a bad idea.

Some volcanoes are hot enough to scald you but most are just warm.  The smell of sulfur was overwhelming during my visit.

Finding the volcanoes was a little tricky as they are about 3 miles down an unmarked, deeply rutted mud track.

If it has recently rained there is no way to reach the site even with 4 wheel drive.  Remember this area was under water just a few years ago.

It had not rained in a couple of weeks and there were many duck hunters in the area that had set fresh tracks.

I was barely able to follow the ruts in the Cabose and had to backtrack several times to find the right trail.  At one point I considered walking the rest of the way.

The Salton Sea is located directly on top of and at the south end of the San Andreas fault.  The surface of the sea is over 200 ft below sea level.

While I wandered around the area I thought about what I might witness if there was a major earthquake during my visit.

Would there be a tidal wave?  Would there be major eruptions at the mud volcanoes?  Would the area sink further?  It would have been a very exciting event to experience, unfortunately the ground was steady on the days that I visited. 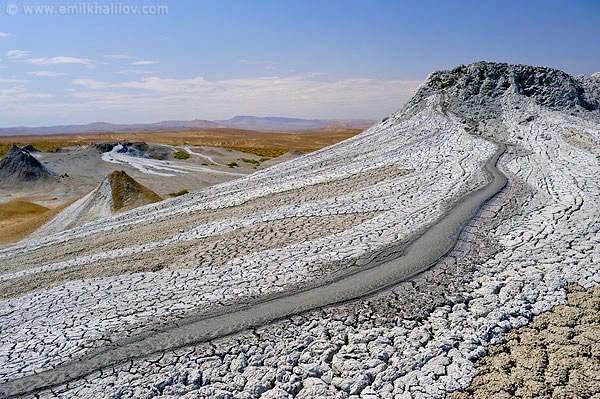 The Salton Sea is a known Geothermal resource area and currently has 15 active geothermal plants.  Combined, the plants can produce about 570 MW, enough to power over 100,00 homes.

The southern Salton Sea has the most geothermal capacity potential in the U.S.

These power plants are “flash-steam facilities”  which pull hot water out of the ground, flashing it into steam to run turbines, then recapturing as much water as possible for injection back into the ground.

Due to evaporative losses, less water is pumped back in to the ground than is pulled out,  the resulting effect is fluid extraction.  This process can cause subsidence or ground sinking.

Three of the current production wells pull water from a depth of 7,500 feet. 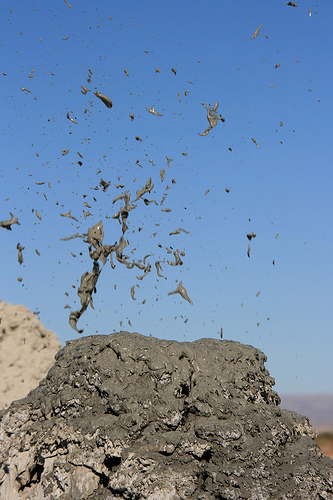 Efforts to increase production are tempered by concern over induced earthquakes.

The location of the geothermal field at the southern end of the San Andreas fault is cause for concern due to the possibility of producing a damaging earthquake.

A recent study of the area found that in last 30 years the largest quake was magnitude 5.1.

Though the vast majority of quakes were small they were directly related to power generation pumping activities. 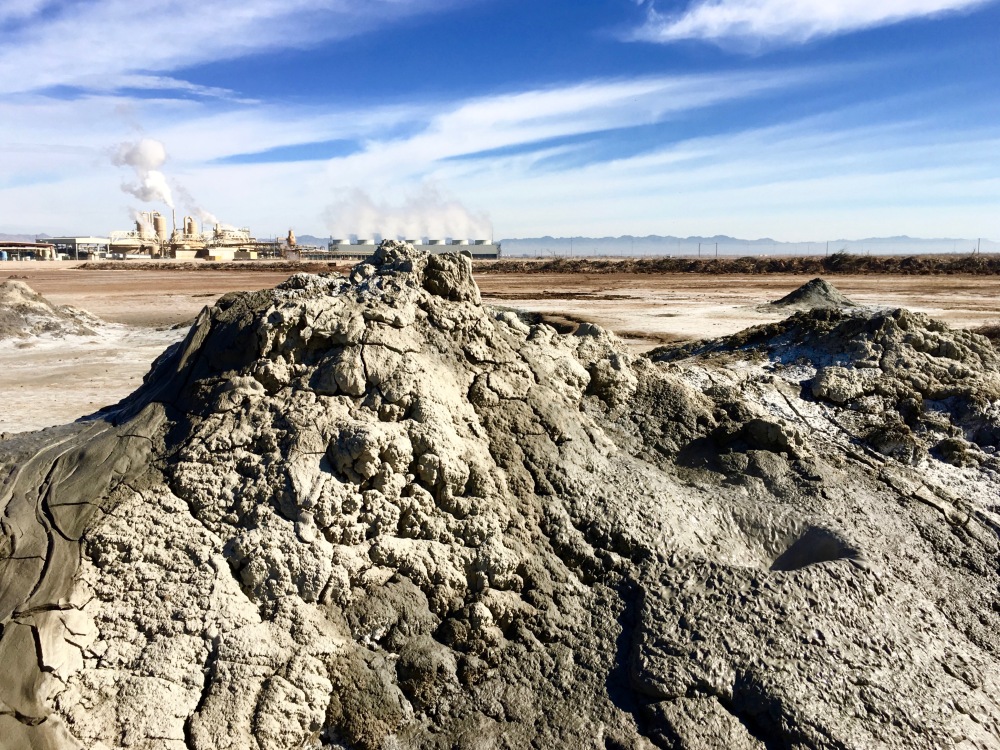 These quakes are occurring about 12 miles from the southern end of the San Andreas fault.  Seismologists predict a devastating temblor along this fault will eventually rock the Southland.

Some scientists predict that if the lake goes dry that alone may trigger quakes.

All these statistics and predictions will make for an interesting future for the Salton Sea and southern California.

At the very least the Salton Sea has become one of the most important issues in the southwest when it comes to water rights, peoples lives and wildlife.

I for one will be following this story very closely and with great interest.

We have had a great time camping and exploring around the Salton Sea during the past few weeks and we most certainly will return in the near future.

11 thoughts on “The Primordial Mud Volcanoes Of Morton Bay”